With its stunning mountain scenery, a thriving capital in Tirana and beaches to rival anywhere else in the Mediterranean, Albania has become the hidden gem of the Balkan nations, With its young bustling metropolis, networks of cobblestone pedestrianized streets, coastal beach towns, and cities of ancient ruins, Albania will continuously surprise you. As you reach each new major town and discover how completely different it is from the last, your appreciation will deepen for this tucked-away land steeped in history 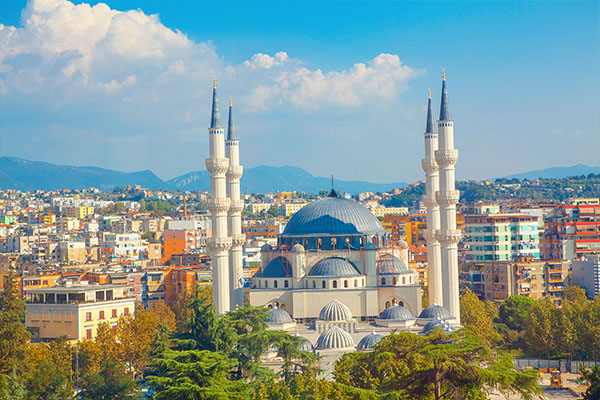 Things to know before visit Albania

Albania has a Mediterranean subtropical climate. On the coastal front, there are long, hot and dry summers with a humid and mild winter. In the inland mountainous region, especially in the north, there is extreme winters with heavy snowfall and hot, dry summers with a few showers. Summer lasts between June and August while winters are between December and March.

The riviera is a popular tourist destination with a lot of music festivals being held here including the Soundwave Albania and Turtle Fest. People come here to enjoy the sun, the sand and the sea and indulge in varied water sports. Seaside town of Himara is a great place to start your trip in the riviera. Beaches of Porto Palermo Beach, Llamani and Filikuri have some of the best sandy beaches where one can relax and unwind.

Berat is a mecca for history lovers. This city was built as a castle in the past atop a hill. The remains of the original castle- Kalaja can be seen here. The city also has some stunning churches and mosques. Berat is often called a city of a thousand windows as most of the houses have huge window frontages that make the skyline. In 1961, the city was termed as the “city of museums” with scores of museums to explore.

The capital city of Albania, Tirana is the stepping stone for many tourists. It has a fine blend of modernity and traditional aspects. It is renowned for its vibrant Ottoman, Fascist and Soviet-era architecture with pastel buildings surrounding the city. Some of the must-see places in the city include; the Skanderbeg Square where the National Historical Museum is located, Petrela Castle, National Art gallery and the 18th-century Et’hem Bey mosque.

Kruja is a hisotrical town and also the birthplace of Albania’s National hero. The most important monument in the city is the Kruja castle. It has the Skanderberg museum that has a collection of exhibits of the war. Other places of interest here are the tomb of Sari Saltiks and Qafe Shtama national park, which is located in the town.

This city has seen settlement for 2500 years. Today, it is listed as the UNESCO world cultural heritage site, the city has a unique architectural style called Balkan architecture. It has houses that look like castles and are made of stones. Hence, the city is called the “city of stones”. The other tourist attractions in town are the fortress, Zekate house, Skenduli house, Bazaar mosque and the varied museums and theaters.

Electricity:While traveling to Albania it is advisable to carry an international power plug adapter with multiple plug configurations. The standard voltage is at 220V and the frequency is 50 Hz.