The Essence of Morocco

Upon arrival with the we will be met by our expert and English speaking tour leader who will assure our assistance and transfer to the hotel in Rabat.Time permitting we will cross the city of Casablanca in order to see the Hassan II mosque. This is the most impressivearchitectural achievement in Morocco over the last few generations and it reflects the beauty and the intricacy of Moroccan traditional arts. After this rich introduction to Morocco, we will continue through the 1930’s streets andboulevards built during the French protectorate and where we can still see a lot of art deco architecture. We may stopto visit the church of Casablanca and the amazing stained glass work accomplished here by a French artisan, Mr. Gabriel LOIRE, in the mid fifties.Arriving in Rabat we will check into our hotel . Overnight stay.

After breakfast at the hotel.Rabat is an elegant city as it has been serving as the capital of Morocco and the official residence of the king since theearly 20th century. Yet this capital maintains a traditional Moroccan character like all the historical cities of the country.Our morning tour begins with the fortified Kasbah Oudaya including the 17th century royal residence and its Andalusiastyle garden. Mohamed V Mausoleum, a masterpiece of the Moroccan art and craft next to which stands the medieval Hassan Tower built in the late 12th century. We leave Rabat and head inland to the city of Meknes which served as thecapital of Morocco in the 17th century for the Sultan Moulay Ismail. This king had a reputation of a ruthless warrior but hewas also a builder as during his 55-year reign, he developed Meknes from a small town into a majestic capital withgigantic ramparts, monumental gates, palaces and more than 15 miles of exterior walls. Our tour leader will take us for acomprehensive tour of the city’s highlights such as the impressive granaries and stables built by the Sultan for his cavalry,the Mausoleum of the King located inside a beautifully built mosque, the monumental gate of Bab El Mansour dominating El Hedim square and the colorful food market.
In the early afternoon, drive north towards the mountains of Zerhoun to visit Moulay Idriss, the holiest town for the Muslimsin Morocco, where the first King is buried. After that, start a walking visit of Volubilis, the Roman capital of Morocco builtover two thousand years ago when this part of the country was a Roman province.
Discovering the Roman part of the Moroccan history, you will admire one of the most beautiful collections of mosaicswhich have never been moved from their original site since their discovery in the early 20th Century.
Late in the afternoon drive back to Fes via the village of Zgouta through a different part of this scenic countryside.After this visit will go for a wine tasting at one of the most popular wineries in Morocco, followed by Lunch.
Continue to Fez By the late afternoon.Overnight stay

After breakfast you .The old city of Fez is said to be the most complete medieval city in the Arab world and has preserved its medieval aspects andway of life. This walking tour will stimulate all our senses as we go for a guided tour inside Fez el Bali (old Fez) across food andspice stalls, handicraft quarters, auction squares and colorful stores. We will see the local communal bakeries and have a lookinto children’s pre-schools, enter artisan workshops and discover the secrets of their ancestral arts and walk by many historical fountains, mosques and sanctuaries.
After a break in Nejjarine square to visit the museum of Fez carpentering and cabinet making we will meet the traditional agave silk weavers, visit the famous leather tanneries, coppersmiths and dyers to learn more about their traditional art. Fez isthe spiritual and artistic capital of Morocco which we discover in detail as we walk into the amazing 14th century Medersa(theological school) and see the intricacy of the work done over hundreds of years or look through the gates of al-Qarawiyyinmosque which is the oldest university in history of humanity founded in 857and was in the middle ages the cultural link betweenthe Middle east and Europe.
In The Afternoon will be guided across the labyrinthine streets of the old Medina and provided with an Arabic phrasedocument to help us in communicating with the family and practice the Moroccan Arabic language. After reaching the local home and being introduced to the family we will start our experience with traditional bread making which we will take to bakeat the communal oven. We will walk together into the food market to buy the fresh ingredients necessary to prepare themeal. As we go from one store to the other in the company of our Moroccan hosts we will start practicing some simple Arabicwords and phrases. Returning to the house we will start learning how to prepare the Moroccan traditional Tagine and seasonal salads. Our hosts will help us to learn how to communicate in Arabic as we learn the secrets of the Fez cuisine as well as themaking of preserved lemon and the basic sauce for marinating which are necessary for successful Moroccan cooking. Afterlunch we will have a relaxed moment with the family to have our hands on and learn how to prepare the Moroccan mint teaand learn more about the life of this family .Overnight stay

After an early breakfast, at 08h00 drive crossing the cultivated and fertile valley of Saiss up to Imouzzer de kandar with itsnearby gorgeous lake ‘Dait Aoua’ and on to Ifrane, a charming ski resort, and Azrou, a typical Berber town with its flatroofed earth houses. continue to Midelt situated at 5000ft of altitude and where we can have a break for lunch .
The road goes through magnificent cedar, pine and oak forests. This particularly varied itinerary from north to south offersa diversity of impressions through the Middle Atlas Mountains where nomad shepherds live in black tents and move withtheir herds of goats and sheep across these mountains in the hot season down to the desert land areas in the winter.
Follow our route down to the Saharan plateau before you start ascension up the High Atlas Mountain where we will seesome of the most beautiful sceneries so far thanks to the geological variety of this range as well as its date palm valleys, fortified earth made villages.After Errachidia we will enter the Tafilalet country from where the present royal family is originated and admire thislegendary valley named Ziz and which runs along a deep canyon all the way down to Erfoud. We will drive to the sanddunes of Merzouga where we enjoy the enormous silence we watch the sun set over the desert as we take a camel ridealong the Morocco’s only Saharan dunes where our team will be welcoming us in our private desert camp. We will
spend the night in our luxury tents. A traditional dinner of local will be served and local musicians will entertain you under the stars. Dinner & Overnight stay at a private desert camp.

After an early wake up to enjoy the scene of the sun rising over the sand dunes, we will have breakfast and leave theSahara desert towards Skoura. Our drive will first take us across a series of luxuriant oases where we will see remains ofthe medieval Khettara irrigational systems as well as some local agricultural activities. We will stop is in Tineghir, astunning oasis at the foot of the high Atlas mountains. From there we will drive along this enchanting valley of whichwe will take some extraordinary pictures. We will enjoy a walk along the 984-foot deep Todra Gorge, home to a varietyof rare plants and bird species.
In the afternoon we begin our journey along the “Route of a Thousand Kasbahs”. This is a region of earth madefortresses with elaborately decorated façades making this architectural technique and style quite unique to this part ofthe South of Morocco. We will drive through “The Valley of the Roses” and El Kelaa M’gouna, Morocco’s “rose capital”before arriving to Skoura .Diner & Overnight stay

After breakfast we visit the Kasbah of Taourirt which was once the home of the "Lords of the Atlas" we leave Skoura to drive acrossa spectacular barren plateau with some film sets and studios where a certain number of famous movies have been shot.We will make a stop at the UNESCO protected village of Ait Ben Haddou. This is one of the most beautiful examples ofthe Berber architecture that the UNESCO is trying to preserve. The natural beauty of the whole area and the architectureof this village have attracted many film producers who made this place the background for the making of films such asKingdom of Heaven, Gladiator, Babel.
After lunch we will set sail for Marrakech along the most spectacular scenic road in Morocco. The road which was builtby the French foreign legion nearly a century ago goes via the scenic Tizi N’Tichka pass and down to the plains ofMarrakech.We will check in our hotel and time permitting we may join our tour leader for a walk on the square of Jemaa El Fnawhere different entertainers perform here at the end of every day.Overnight stay

After breakfast we start the tour of Marrakech which is considered as one of Morocco’s most cosmopolitan cities and boasts a spectacular location surroundedby farmlands and snow capped mountains including the highest peak in North Africa rising at 14,000 ft. We will discover an exciting blend of modern architecture and an ancient walled medina. We will firststand by the Koutoubia Mosque with its 282 ft minaret, an architectural landmark dating back to the late 12th century.
We will then enter the Kasbah from Bab Agnaou gate to visit the historical and beautifully ornate Saadian necropolis ofthe 16th century. Our walk through the 12th century Kasbah and its food market, bakeries and narrow alleyways will leadus to the Badii palace built in the 16th century. Here we will admire the marvelous pulpit of the Koutoubia mosque madein 1137 in the city of Cordoba by the best cabinet making artisans of that time. We will continue to the 19th centuryBahia palace and discover the intricate work done by the local artisans to decorate this splendid home built by apowerful Vizir for his Harem. We will end our exploration with a stroll inside the Jewish quarter and visit the historical
synagogue built in 1492 by Sephardic Jews expelled from Spain.
After a break for lunch we will be guided through the “Hidden sides of Marrakech” where we will admire thearchitectural beauty of the oldest building in the city called the Koubba of the Almoravids, a dynasty who ruled in the12th century. From there we will start exploring artisan quarters and the colourful Souks to interact with the real life ofMarrakech people. Before sunset we will be strolling in the square of which the city is so famed, Jemaa El Fna, wherehundreds of locals and tourists come to spend the end of the day watching jugglers, dancers, fortune tellers, story tellersand traditional musicians.
You may wish to stay here for dinner either on the square where you may sample street foods from simple kebabs to themost bizarre recipes, or sit comfortably in one of the good restaurants around the square for a nice dinner before youreturn to your hotel.Overnight stay

After breakfast,our tour leader will assure our transfer and assistance to the airport for the return flight. 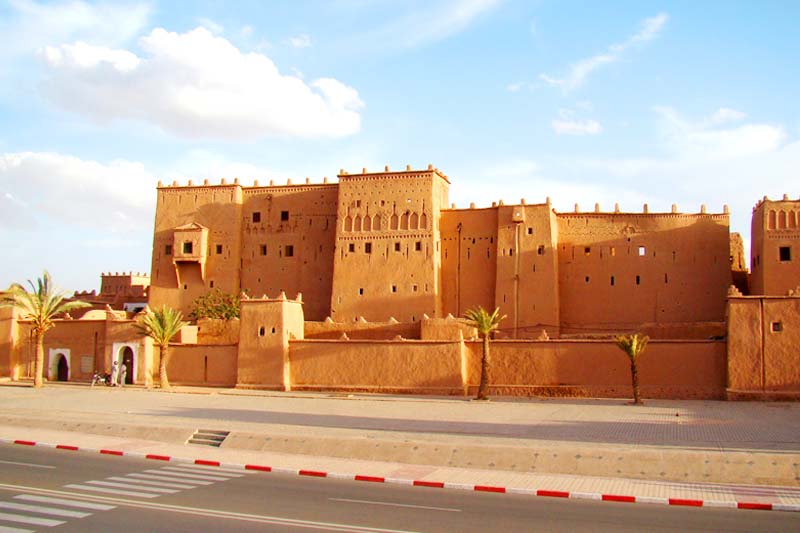 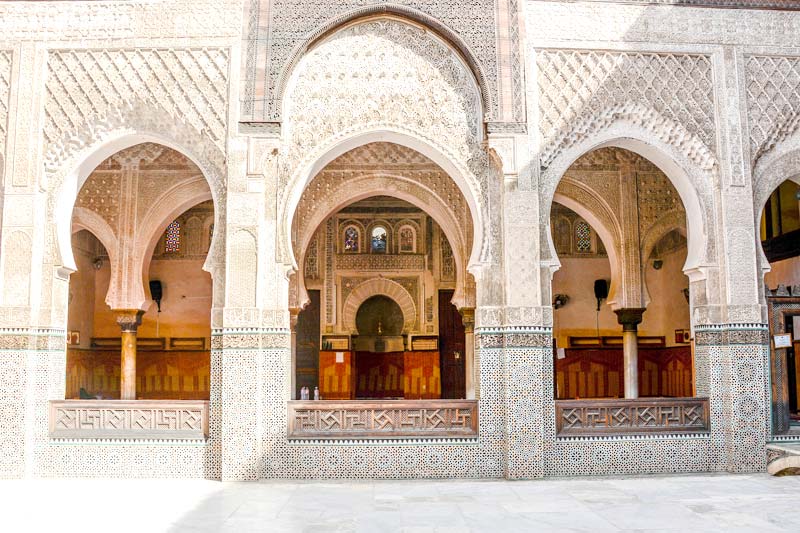 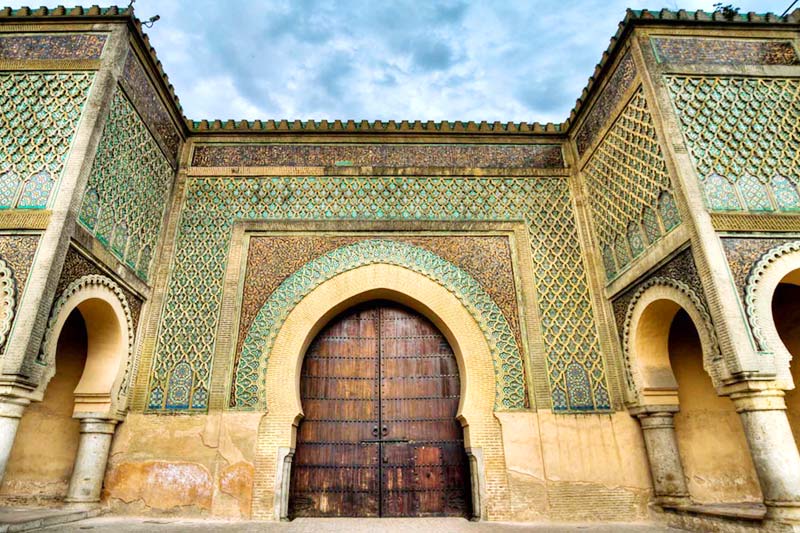 07 Nights accommodation at Hotels as Shown above
All Meals as indicated
Arrival & Departure Transfers
A/C Private deluxe car at disposal From Day 2 Till Day 6
Local English Speaking Guide for the visits of Casablanca,
Rabat, Fez & Marrakech
Entrance Fees to the monuemnts
Water in the Car During the Tour
All Local taxes.

Optionals on request at additional costs.
These are starting from fares subject to revision at the time of booking