Book Now
Enquire
Overview
7 Days & 6 Nights Guaranteed Departures 2020 Enjoy the wonderfully preserved history with the grandeur of St. Petersburg, the imperial city of the Tzars. Explore the history and culture of this region, the many palaces including Peterhof palace and state hermitage in St. Petersburg and the Kremlin in Moscow.
Detailed Itinerary

Arrival to St. Petersburg Airport, meet & greet by an English-speaking representative, for Regular Arrival Transfer Service to the hotel* for check-in.
Please consult the welcome letter which you will receive on check-in to your hotel, and kindly note where and when to meet your tour leader. Day is at leisure.

Breakfast at the hotel. In the morning, we will be met by a local guide for a panoramic city sightseeing tour, which will cover some of the many highlights of the city. We will drive along the Nevsky Prospect - the heart of the city, and make picture stops at the Spit of Vasilievsky Island, the Senate Square, The Peter and Paul Fortress, St. Isaac's Cathedral, the Art's Square and the Russian Museum as well as at the two magnificent churches, the "Spilled Blood" and the Nikolsky Cathedral. The city tour ends at the hotel. The rest of the day is at leisure to further explore this magnificent city and its treasures. Your tour escort will provide you with suggestions for tours.

OPTIONAL - Peterhof Palace
Duration: approximately 5 hours
Includes: private transportation from/to hotel, entrance to
Peterhof w/guided tour, private tour guide
Min 6 persons
Available by pre-booking & in situ
Take the opportunity to visit the Peterhof Palace, also known as the palace of the Sea God. Here the fountains are not mere accessories: they are the essence of the place. They are the symbolic expression of the sea's dominion, the mist that rises from the waves as they surge against its shores. The world famous palace, fountain and park ensemble of Peterhof, is an outstanding landmark of Russian artistic culture from the 18-19th
Centuries. Founded in the very beginning of the eighteenth Century by Emperor Peter the Great, not far from his new northern capital St. Petersburg, Peterhof was intended to become the most splendid official royal summer residence. Credit for its creation should go to a great number of eminent architects, artists, and anonymous folk craftsmen. Its wonderful parks, 176 fountains of various forms and styles, and four cascades, majestic palaces, numerous gilded statues of ancient gods and heroes, remarkable collections of sculpture, painting and works of the minor arts make Peterhof a veritable gem of art unique in the world, often called "Capital of Fountains". After 1917 the Peterhof ensemble was taken into state custody and turned into architecture and art museum. Nowadays, due to the unforgettable beauty of its fountains, parks and palaces, Peterhof has become the most attractive suburban royal park and palace ensemble of northern Russia's capital for numerous Russian and foreign visitors.

Breakfast at the hotel. We meet our local guide to continue our adventure in this charming city. You will visit The State Hermitage Museum, which occupies six magnificent buildings situated along the embankment of the River Neva, right in the heart of St. Petersburg. The leading role in this unique architectural ensemble is played by the Winter Palace, the residence of the Russian Tsars that was built to the design of Francesco Bartolomeo Rastrelli in 1754-62. This ensemble, formed in the 18th and 19th Centuries, is extended by the eastern wing of the General Staff building, the Menshikov Palace and the recently constructed Repository. Put together throughout two centuries and a half, the Hermitage collections of works of art (over 3,000,000 items) presents the development of world culture and art from the Stone Age to the 20th Century. Today the Museum is creating a digital self-portrait to be displayed around the world. The tour ends at the hotel. The evening is at leisure.

Breakfast at the hotel. Transfer with local guide from your hotel to the Railway station, where we will board the Sapsan Train bound for Moscow. This train ride takes you through endless Russian landscapes and along the Volga River. Afternoon arrival in Moscow and transfer to your hotel Intercontinental Moscow Tverskaya, located on the main avenue of the city, Tverskaya. The evening is at leisure.

Breakfast at the hotel. This morning starts with a full day privately guided panoramic sightseeing tour of Moscow. We will see many ancient churches and cathedrals, some of them dating as far back as the 15th century, many of them having been restored or even built again; beautiful theatres and palaces; modern business complexes and hotels; buildings of late Soviet architecture such as the Moscow State University and the Central Stadium in Luzhniki, which hosted the 1980 Olympic Games. Moscow, with its some 10 million inhabitants, is vast and at times chaotic. We will visit the historic centre of the city, which includes the Red Square, Sofiiskaya Embankment, St. Sophia Cathedral, and the panorama of the Kremlin walls. We will also see the modern part of the city which includes the Vorobievy (Lenin Hills) – the highest place in Moscow, providing a beautiful view of the city and Poklonnaya Hill where there is a monument commemorating defenders of the city during World War Two. During this visit we will also experience a tour of one of Moscow’s beautiful Metro stations, a highlight in itself and a must do when visiting Moscow. After the Metro visit, free time for lunch before we continue our visit of the city. The rest of the afternoon and evening are at leisure.

Optional: National Russian Dance show “Kostroma”
Duration: approximately 4 hours including transportation
Includes: private transportation to /from hotel, 2 hours show, private local tour guide. 18.00 – 22.00 hours
Min 6 persons
Available by pre-booking & in situ
Subject to availability
“The Russian National Dance Show “Kostroma” is the program that reveals the history of Rus and the life of its peoples where the infinite of time and horizons broaden the boundless means of the art of dance. Vital historical milestones, traditions and customs of the multinational Russia expose originality of the hundreds of cultures of the united people of Russia plunging the audience in the times of christening of Rus, tsar’s Russia and USSR, revealing the life of the people living in the Far North, in the southern steppes, in the mountains of the Caucasus and in the Central Russia. The Russian National Dance Show “Kostroma” cleverly and with great prowess unites lyrical sketches with elements of folklore and ancient Russian epic. It uncovers the Russian culture through the nature of its people, social status and national coloring. You can witness the temporal, urban, village, military culture of Russia. The accurately created images of mother, wife, daughter, son, husband and warrior reflect the heritage of the many generations and the unique spirit of the Russian nation. 50 dancers on stage, masterly technique, outstanding acting, 15 reincarnations, 10 tons of freight, 600 unique costumes, 300 items of props, 8 sets changes – this is the fabulous reality of “The Russian National Dance Show “Kostroma” that captivates the audience of all ages and nationalities.

Breakfast at the hotel. We meet our local guide for a half day excursion, which includes a privately guided tour of Kremlin Territory with Armoury Chamber. During this tour we will walk through the Kremlin grounds and visit the Armoury Chamber with its famous collection of Faberge eggs, jewels and royal thrones. The word Kremlin (Kreml) means a fortress or walled town; Moscow’s is the biggest and most famous. The earliest ramparts were of earth and wood, but successive rulers raised and strengthened the defences after every attack. The present brick walls date from the 1490s, though they have been frequently restored. End of the tour at the hotel. The rest of the day is at leisure.

Optional: River cruise on the Moscow river
Duration: approximately 3-3,5 hours including transportation
Includes: private transportation to /from hotel, 2 hours cruise, private local tour guide. 16.00 –19.30 hours
Min 6 persons
Available by pre-booking only
Subject to availability
The Radisson Royal Flotilla yachts are state-of-the-art river yachts-restaurants meant for excursion and entertainment cruises along the Moskva River for citizens and visitors of Moscow. The flotilla consists of 10 white-beauty-yachts designed for year-round entertaining excursion cruises on the Moscow River. Flotilla offers all year around navigation - 365 days a year: daily cruises with fixed schedule along with touristic rides with audio excursion about attractions along the route in 2 languages on mp3 players or free iPhone application; free internet access (Wi-Fi). Once aboard the custom designed yachts, passengers enjoy the beauty and comfort possessed by these exceptional vessels. State-of-the-art technology ensures safety and reliability, allowing guests to fully relax and enjoy the splendid two-hour cruise. Two promenade decks offer panoramic visibility of picturesque Moscow.

Breakfast at the hotel. An English-speaking representative will meet you for the Regular Transfer Service to Moscow Airport*(Please see notes below for this service).

*Please note! Regular Departure Transfer Services included in the program are only available for transfer to Moscow Airport and only on the official end date of tour. The transfers are escorted by an English-speaking representative and are shared with other fellow passengers; therefore, minor waiting time at the airport may occur. 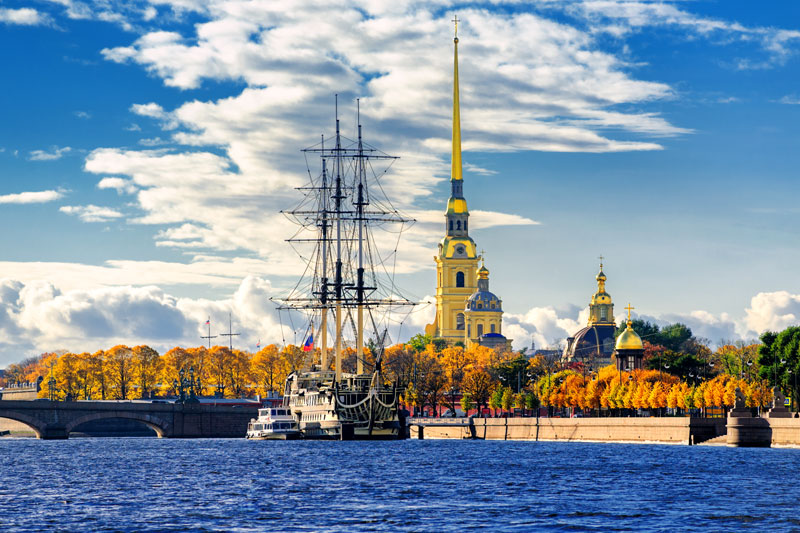 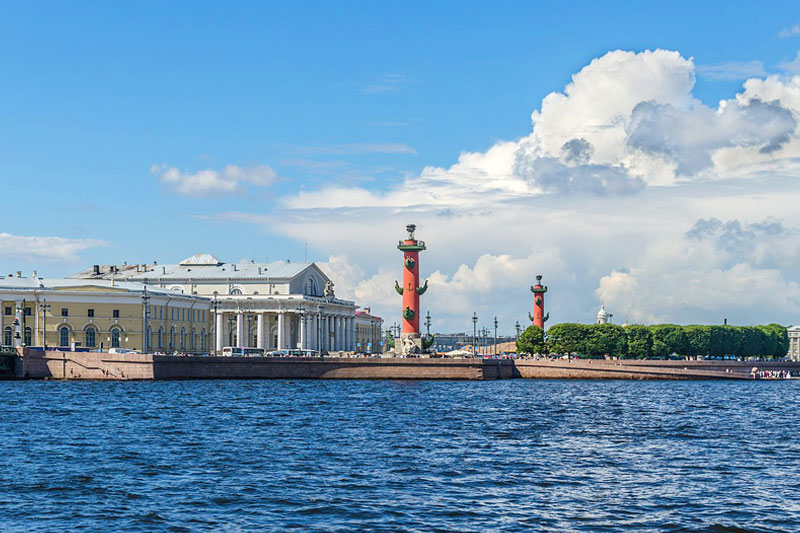 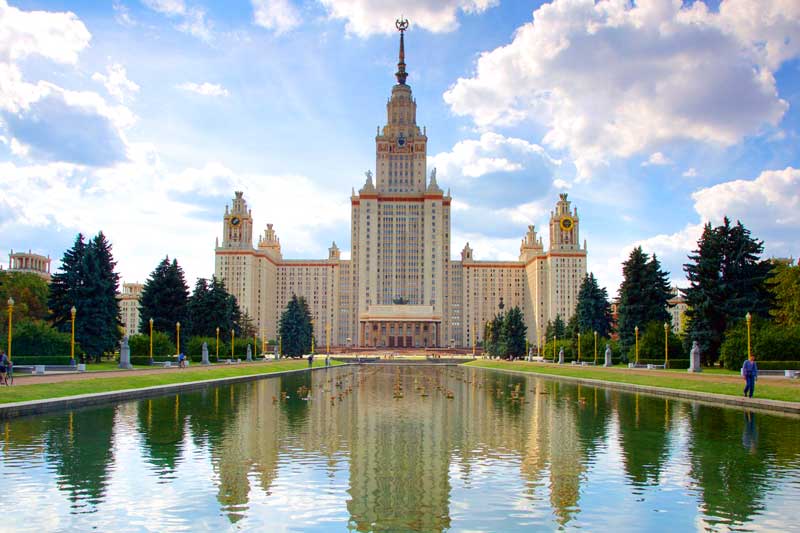 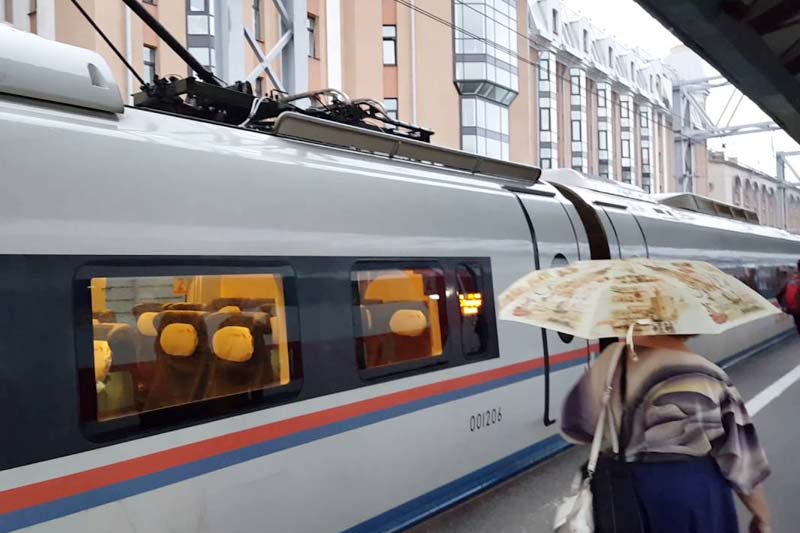 • 6 nights at hotels in standard double/twin rooms with private facilities
• 6 Breakfasts - buffet style
• Bi-lingual tour escort from Day 2 to Day 7 (English & Spanish or Portuguese)
• Train ticket for journey St. Petersburg- Moscow, Train Sapsan
• All touring by private coach, including all the sightseeing mentioned in the program
• MONOLINGUAL Guided tours in the cities of St Petersburg & Moscow. For city tours with local guides, the group will be divided by languages, with their respective monolingual local guide
• Regular Arrival Transfer, from Pulkovo Airport*
• Regular Departure Transfer, to Moscow Airport*
• Porter Service, at the hotels and railway stations during the program (Excl. Day 1 & Day 7).
• 1 suitcase & 1 piece of hand luggage per person

*Please note! Regular Arrival Transfer Services included in the program are only available for transfers from the Airport in S. Petersburg & to the Airport in Moscow and only on the published official date of beginning & end of the tour. The transfers are escorted by an English-speaking representative and are shared with other fellow passengers; therefore, minor waiting time at the airport may occur.
This transfer service is not valid for passengers with pre/post nights or passengers who require private transfers – for a supplement, private transfers can be reserved for these passengers.

Maximum 2 children per room, sharing with parents. . Due to the nature of the tour and the destination, we are unfortunately not able to accept children younger than 7 years old on these tours.
Child supplement cost is available on request

Cost for optional activities is available on request